In France, herbivorous rearing systems are confronted with two main constraints or requirements: (i) an appropriate response to the commercial demand of market chain operators (the characteristics of production and distribution of production throughout the year) and (ii) landscape preservation (environmental considerations). To take these considerations into account, stockbreeders have to make more or less profound modifications in their production systems. Decision Support Systems can be useful tools in accompanying these changes and must be able to simulate the consequences of changes in management practices on herd performances. The challenge for the corresponding dynamic models involved in such tools is also to be able to take into account the variability of individual responses within animal communities (batches, herds). In southern countries, animal productivity is relatively low and the main goal is still to increase productivity while taking into account environmental constraints. The challenge of developing animal productions to contribute to supplying urban areas with high quality protein and to maintaining economic conditions of production in rural areas has led to a demand for operational strategies for sustainable development in these countries. Modelling and simulating tools seem to be well adapted to meeting this challenge. In tropical countries, the notion of the herd is widely used, from the number of animals belonging to a family to a Meta population managed at a regional scale by a human community. The relationship between individual performance and herd performance is then less easily defined.

Livestock farming systems have to include the objectives of the stockbreeder, who has to make choices and decisions to direct herd outputs. The analysis of herd functioning deals with the relationships between biological functions of the concerned species (e.g., reproductive ability, production efficiency) in a more or less constrained environmental setting (especially climatic factors and access to primary resources) and the farmers' decisions (herd management practices). The classical scheme under temperate conditions underlines the complexity of interactions that must nevertheless be taken into account for a better understanding of herd functioning. It is important to include the interface between several knowledge levels and to link the nutritionist's point of view (which mainly concerns the animal and the biological response laws) with a systems approach. Most of the studies dealing with herd simulation that were carried out during the last 10 years, focused on technical and economic aspects to test the effects of management modifications (e.g., culling, breeding) or commercial orientations for different types of products. Most of the methodologies are based on dynamic modelling, including stochastic processes (Markov chains). This method is used mainly in dairy systems, and to a lesser extent for beef cattle production. In tropical areas, methods and analyses are mostly focused on the organisation of the farming system (Cirad in collaboration with Inra). Animal productivity is described in relation with environmental characteristics and farmer practices (typologies of the systems). Cirad Emvt has been engaged for a few years in projects aimed at proposing herd functioning indicators. These indicators (e.g., numerical productivity, animal stocking rate on rangelands) are used for diagnosis, or to assess or correct a given situation. Modelling approaches are developed (e.g., population dynamics, herbaceous systems dynamics) to collect and organise available knowledge and to determine which tools may be used by managers (e.g., stockbreeders, professional organisations, public or private projects) in a decision support system. In the past, animal researchers considered the herd mostly as an "average animal" without consideration for individual variability when different animals are kept in heterogeneous groups. This has been particularly the case in the determination of feeding recommendations. Management modalities, such as batching strategies, have been specific research objects during the last 10 years. This allowed the use of simulation methods and decisional processes to be taken into account (e.g., decision rules in relation to the biological response at the animal level). These models include three aspects: - The characterisation and formalisation of stockbreeders' rules of decision together with the identification of management sub-units within the herd; - The integration of long-term time scales (several years) allowing climatic or feeding uncertainties to be taken into account together with herd replacement strategies; - Collecting data concerning the animal, considered as the elementary unit of knowledge to analyse herd performance. These data are also indicators used as inputs in the decisional sub-system (productive lifetime traits used for culling, calving dates used to adjust the diet within a batch). The scientific challenge concerning herd functioning modelling can be summarised into four points: - To understand and analyse the relationships between biological and decisional systems, generating new questions for animal production research; - To propose tools to optimise herd functioning according to the farmer's goals and to identify critical points for increasing productivity, accounting for several types of information available at different levels (e.g., animal, herd, population); - To integrate the diversity of disciplinary skills and to promote multidisciplinary projects. This issue of "Animal Research" brings together some of the studies presented in three successive seminars that were organised as a common project between Cirad and Inra. The aim of the project was (i) to stimulate exchanges between different teams of both institutes dealing with animal farming and (ii) to propose methodological approaches dealing with the complexity of herd functioning. The papers in this issue are organised into two categories: (1) Herd functioning: performances and productivity. In this chapter three syntheses of disciplinary aspects (nutrition, breeding) are presented to simulate technical (Agabriel & Ingrand) or economical (Louhichi et al.) performance at the herd level. Models are preferentially based on biological concepts and should take decisional aspects into account. The link between these two sub-systems is described by Cournut & Dedieu for a sheep production system, and by Tichit et al. for llamas and sheep herds. The latter model allows accounting for long-term interactions between management practices and climatic uncertainty on livestock system sustainability. Modelling herd functioning from a spatial point of view needs to superimpose at least two kinds of information: one describing the resources (i.e., grazed areas) and the other describing the animals moving on this resource. The work of Dumont & Hill describes a specific spatial scale according to the grazing resource: the paddock where animals can use their spatial memory capacity. (2) Herd functioning analysis towards DSS and teaching. In this categorie, the objective is to develop tools and software according to the potential use of these tools (e.g., extension services or education). Two examples are presented including a case of disease control (Lesnoff et al.) and a teaching aid for undergraduate students (Moulin et al.).
Corresponding author: S. Ingrand (INRA SAD), B. Faye (CIRAD EMVT) ingrand@clermont.inra.fr 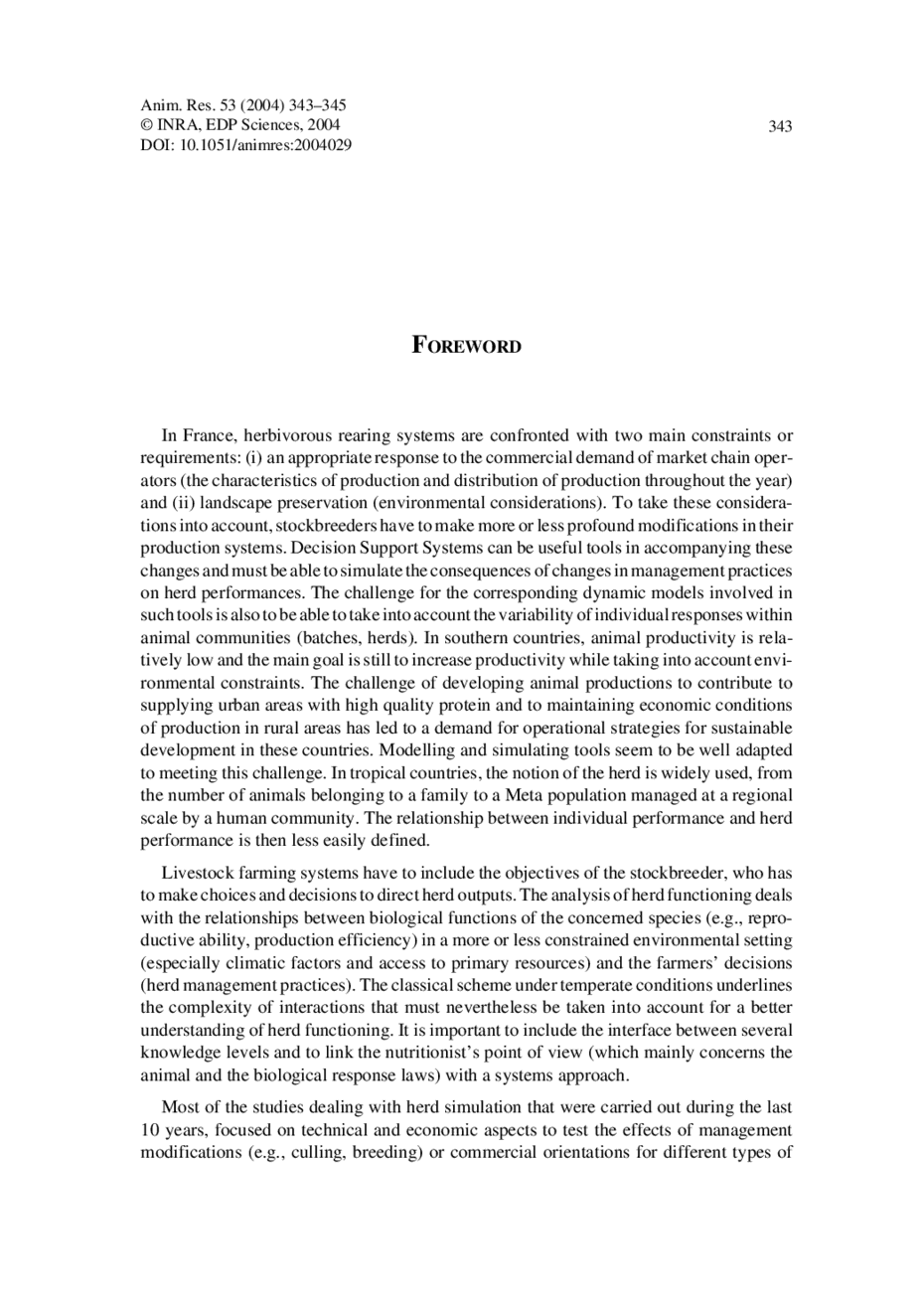